Just when you think you’re a winner, the scene changes, and suddenly you feel like a loser.

All summer long, my daughter, Layla, swam for our local swim team and performed at the top of her game, and almost everyone else’s game as well. She hit her stride and the season perfectly. She’s long and lean and three weeks shy of her ninth birthday — which made swimming in the eight and under division more of a blessing than a battle.

There was nothing she couldn’t do. Freestyle, check. Backstroke, no problem. Butterfly, please and thank you. The only stroke she didn’t excel at was breaststroke, and I’m convinced it’s because she thought it was boring.

There’s nothing my daughter loves more than a challenge.

And each and every week she rose to the challenge and slayed it.

Seeing Layla standing victorious after the 25-meter butterfly and clasping her first place ribbon with white knuckles and a sparkle in her eye was enough to make this anti-swim team mom eat her own words. If you have a child on the swim team, you know all too well what a commitment being a swim team parent is.

Practices every day and swim meets with hundreds of kids running around like chickens with their heads cut off in 98-degree heat for five hours straight.

Layla made it through the regular season with flying colors and a bazillion ribbons. She was even selected as the only female swimmer out of 160 team members to receive the “Oak Award” for demonstrating dependability, reliability and strength. 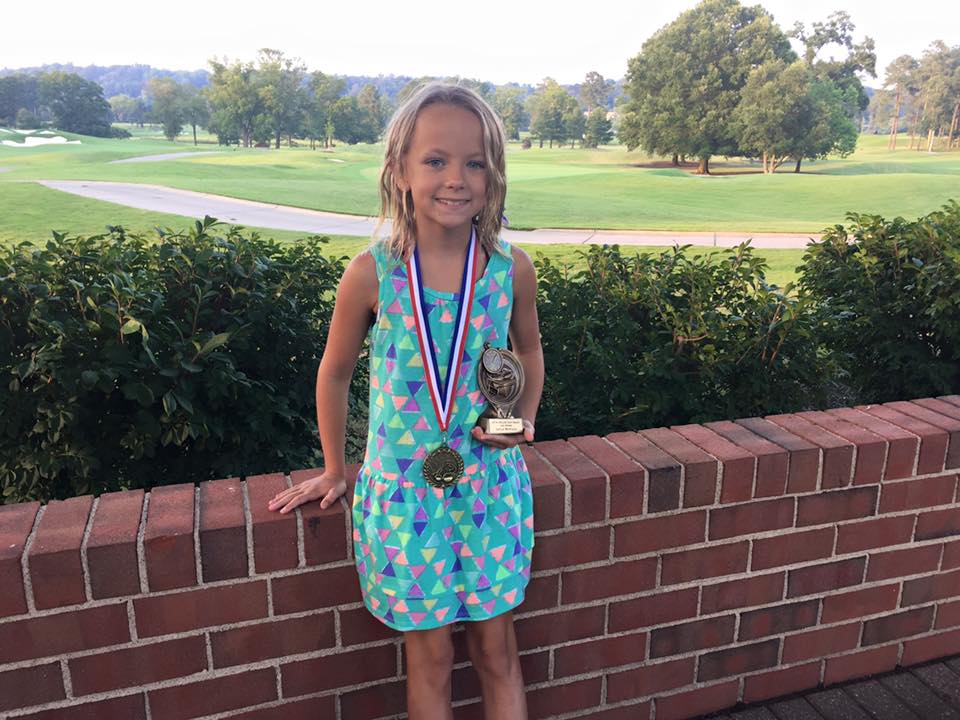 If we could have ended the swim team season five minutes after that picture was taken, Layla would have felt like a winner. But that’s not the way the world works.

When you’re at the top of your game, you get invited to the bigger game.

In the summer swim team world, the top swimmers from individual pools are invited to swim in a  meet called “Champs”. It’s a badge of honor to be worn with pride — only 20% of swimmers even qualify to attend Champs. So after qualifying for five races (wow) Layla was lit up from the inside. She was ready to race her way to victory and come out on top once again. 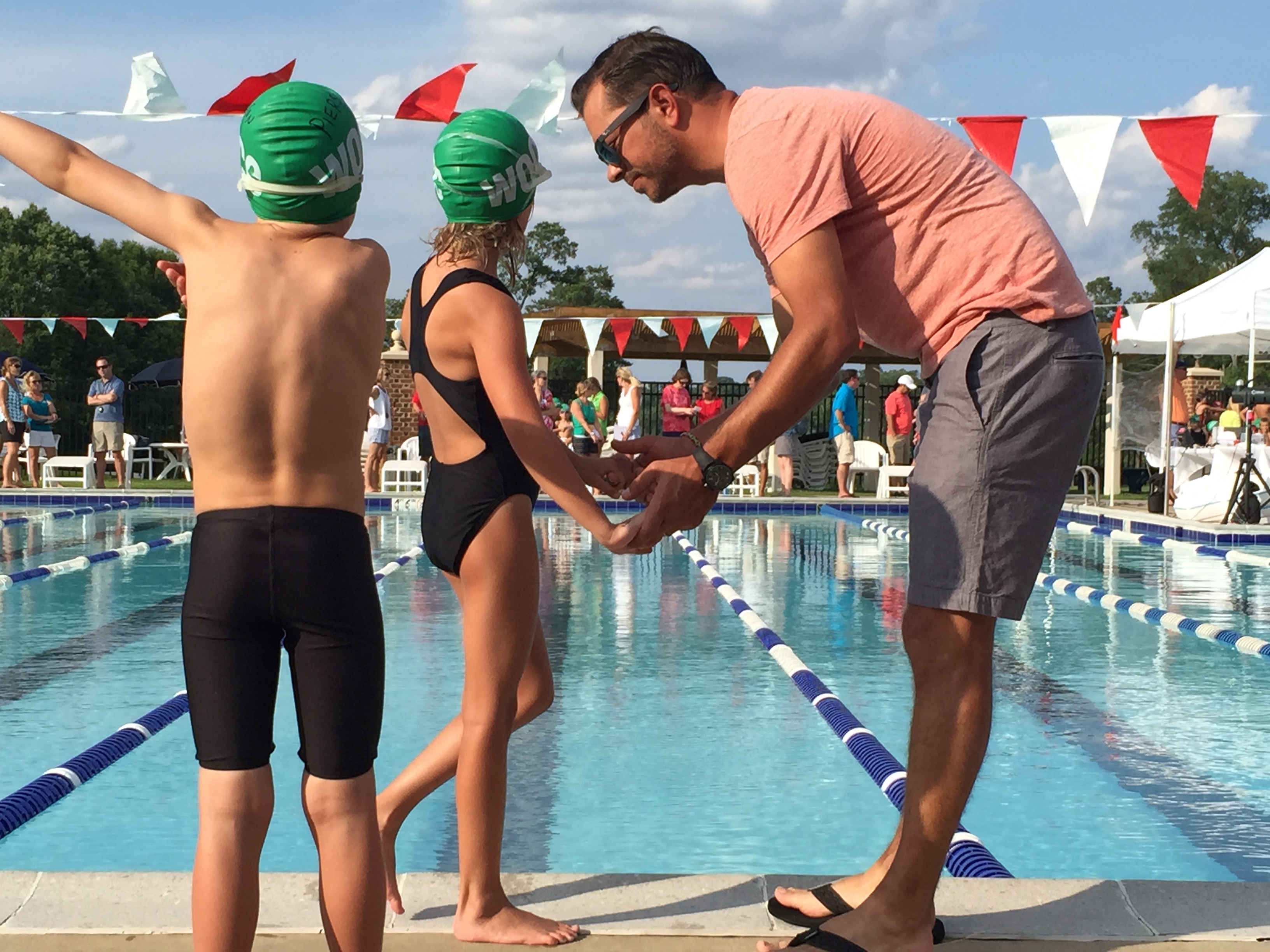 Until she actually competed in those races.

In her very first race, Layla experienced the downside of going from being a big fish in a small pond to a small fish in a very big pond. She couldn’t understand how she was the same person, the same swimmer, swimming the same speed and she was getting smoked by everyone around her.

Her ego took a hit. And my heart took one too.

When your first-born baby girl, your flesh and blood looks at you with tears in her eyes and suddenly says she sucks at swimming, it sets you back. How in the hell do you respond to that? She changed nothing and immediately went from the front of the pack to the back.

The night of Champs I responded with ice cream.

I’ve always preferred to be a big fish in a small pond.

Because I have a fragile ego and a sensitive soul, I’ve always preferred smaller ponds. Take my career for example. For fifteen years I was a small fish in the enormous pond of the advertising industry, and I was swimming my ass off, but I never really felt good enough because there was always more to conquer. So I kept climbing.

However, when I became an entrepreneur and started The Mom Complex, I immediately bounced from a big pond to a small one, and I’ve never been happier. The world of consulting is so much smaller and more intimate than the advertising industry and in this small pond, The Mom Complex is a very big fish because of our deep subject-matter expertise involving mothers.

A week after Champs I was excited to share my observation with Layla.

I thought my words of wisdom would soften the blow of her loss. I explained to her that this bump in the road was a wonderful life lesson. Throughout her life, she should look for clues as to whether she prefers to be a small fish in a big pond or a big fish in a small pond and make big life decisions, like where to live and where to work, accordingly.

Boom. Good job, Mom. Way to turn a negative into a positive and teach a valuable lesson along the way. Two points for me.

too cute the picture of richard and leila. and well said, as usual. howzzzz the lacrosse champion now? big hugs to all of you, you amazing woman!!!

Katherine Wintschreply
– In reply to: ac

Ha. Richard is a very good dad and coach. So far so good with the Lacrosse…however, it’s tennis this week! Can’t keep it all straight. 🙂

Sooooo very proud of Layla for her fabulous “small pond” swimming and especially for receiving the Oak award!! All great assets to demonstrate and I was lucky enough to see them in action! Sending big hugs and lots of love to my favorite family!

Sooooo very proud of Layla for her fabulous “small pond” swimming and especially for receiving the Oak award!! All great assets to demonstrate and I was lucky enough to see them in action! Sending big hugs and lots of love to my favorite family!

Katherine Wintschreply
– In reply to: JB

Hi small pond girl!!!!! It’s so wonderful to hear from you. Thanks for the kind words about Layla. She’s still a bright shinning star – from everything you taught her. Sending you so much love.