People say a picture is worth a thousand words.

For example, if you were asked to write a thousand words about the picture above, you’d likely include things such as how beautiful the scenery is, how refreshed and calm I appear and how brave I was to climb to the top of a mountain.

And none of those things would be true.

That’s the problem with pictures. They don’t tell the full story. Sure, they’re fully capable of capturing a picture-picture nanosecond in time, but they miss the pain and the glory that occurs just before or just after.

We see a woman on the side of a mountain and we say, “Wow how courageous of her.” We see a picture-perfect family photo on Facebook (or Fakebook as my friend Lauren calls it), and we say, “Man, they really have their shit together.”

Maybe she isn’t. And maybe they don’t.

In the picture above, I was anything but courageous. I was terrified.

Here’s why. Last week my parents and I traveled to Jackson Hole, Wyoming to attend the wedding of my first cousin. Since I took a liking to hiking a year ago (after I finally got my head out of my career-driven ass), I was longing to find a challenging hike that would showcase this gorgeous part of the country that I’d never seen before.

Little did I know that “challenging” would become the understatement of the year.

The trailhead for the hike was located six miles from our condo, so I rented a bike and road off in the wind to find my place on the top of a mountain.

What’s not to love? 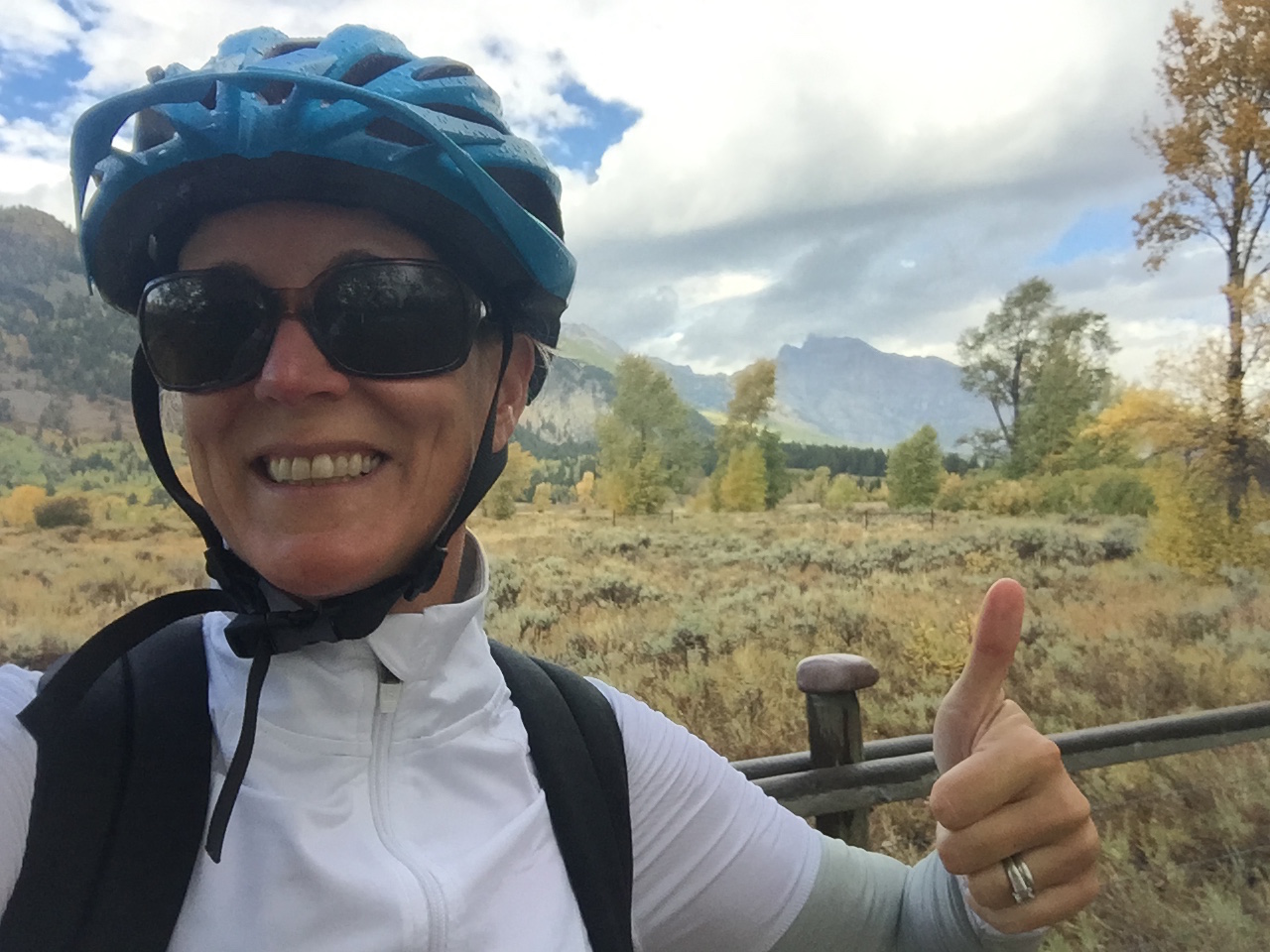 What I failed to consider, despite all the warnings, is that I selected a path that had me riding through the wilderness — which by definition means an area filled with wild animals.

Sure, I had seen a bear, a bison and a handful of chipmunks the day before, but I saw those animals through the windshield and in the comfort of a rental car. And I was with my grizzly bear of an uncle who would undoubtedly protect me as one of his own if we were attacked.

However, the scene was very different the following day when I found myself on that same road, alone and on a bike.

Ten minutes into my ride, I was cruising along without a care in the world, until I suddenly heard an ear-piercing, screeching, holy-hell-what-is-that-sound coming from the woods just up ahead on the right.

Terrified, I slammed on the breaks and found myself eye-to-eye and almost toe-to-toe with a 6-foot tall elk in the woods. He was staring me down while simultaneously spouting his aggressive mating call in my face.

I couldn’t move. I was completely paralyzed.

At this moment, it occurred to me that I was about to either be eaten or romanced by the largest animal I’d ever seen — one that made a full-size buck deer look like something that should be included in my son’s Lincoln Log playset.

After a six-second stare down, I recalled a brochure I read the day before that said one should never “make eye contact with a wild animal.” Apparently, the animals consider it a sign of aggression and they might attack you because of it.

I assure you, Mr. Elk, that I am not trying to get aggressive with you.

I break eye contact with the beast and start racing away on my rented bike that resembled more of a beach cruiser than a getaway vehicle.

During my getaway race through the woods, I started to wonder why there were no cars around, no other bikers, and certainly no strong uncles to protect me.

My question is quickly answered when I stumble upon a huge traffic jam with people stopped, hanging out of their cars and taking pictures of a bear that’s climbing a tree right next to the road.

Bears are cute from cars. They are not cute from bikes.

Luckily there were a half dozen park rangers following the bear on foot and keeping everyone safe, so I snapped a quick picture and got the hell out of Dodge, or what the rangers refer to as a “bear jam.”

By the time I reached the trailhead, I felt better. I was still alive, but I was still scared. Like, call your momma kinda scared. Which is preciously what I did next.

I called my mother and told her I needed her and my dad to come pick me up immediately after my hike because I was too scared to ride my bike back to the condo.

Mom: No problem, Honey. We’ll come and pick you up.
Me: Awesome. Thanks, Mom.
Mom: What’s the name of the trail you’re about to hike?
Me: Death Canyon.
Mom: Jesus, Katherine.

I pulled my bear spray out of my backpack and began my climb. I held the pepper spray at eye level, arms outstretched in front of me, with two fingers on the trigger at all times…like an undercover cop on a drug bust.

Just the look I was going for.

Every time I heard the leaves rustle, I pointed my protection in that direction and started forming new headlines for the local paper, “Richmond-based mom and former Christmas Mother, mauled to death, all alone on the side of a mountain.”

Not a pretty picture.

I eventually made it to the top of the mountain and took my pretty picture. It was my prize for putting one terrified foot in front of the other.

Now, about that picture…does the scenery look beautiful? Sure, on the surface, but not when you’re convinced that something within it will kill you. Do I look calm and refreshed? Maybe to you, but I’m literally holding my insides together if you look close enough. Do I appear brave for climbing to the top of a mountain? Perhaps. But I didn’t feel brave I felt totally and utterly afraid.

Thankfully, at the top, I realized that I didn’t have to get down the same way I came up. I bit off more bear country than I could chew and I was not afraid to ask for help.

I knew my people arrived when a couple made it to the top of the trailhead wearing pants that could be zipped off into shorts and between the two of them they were carrying four walking sticks.

My kind of people. People who look like they know what they’re doing.

I immediately approached the couple and confessed my sins: I was in over my head, I was scared, and I didn’t want to go back down the mountain alone. Please don’t make me walk down alone.

“Follow us!” they said and off we went. Down the mountain together. 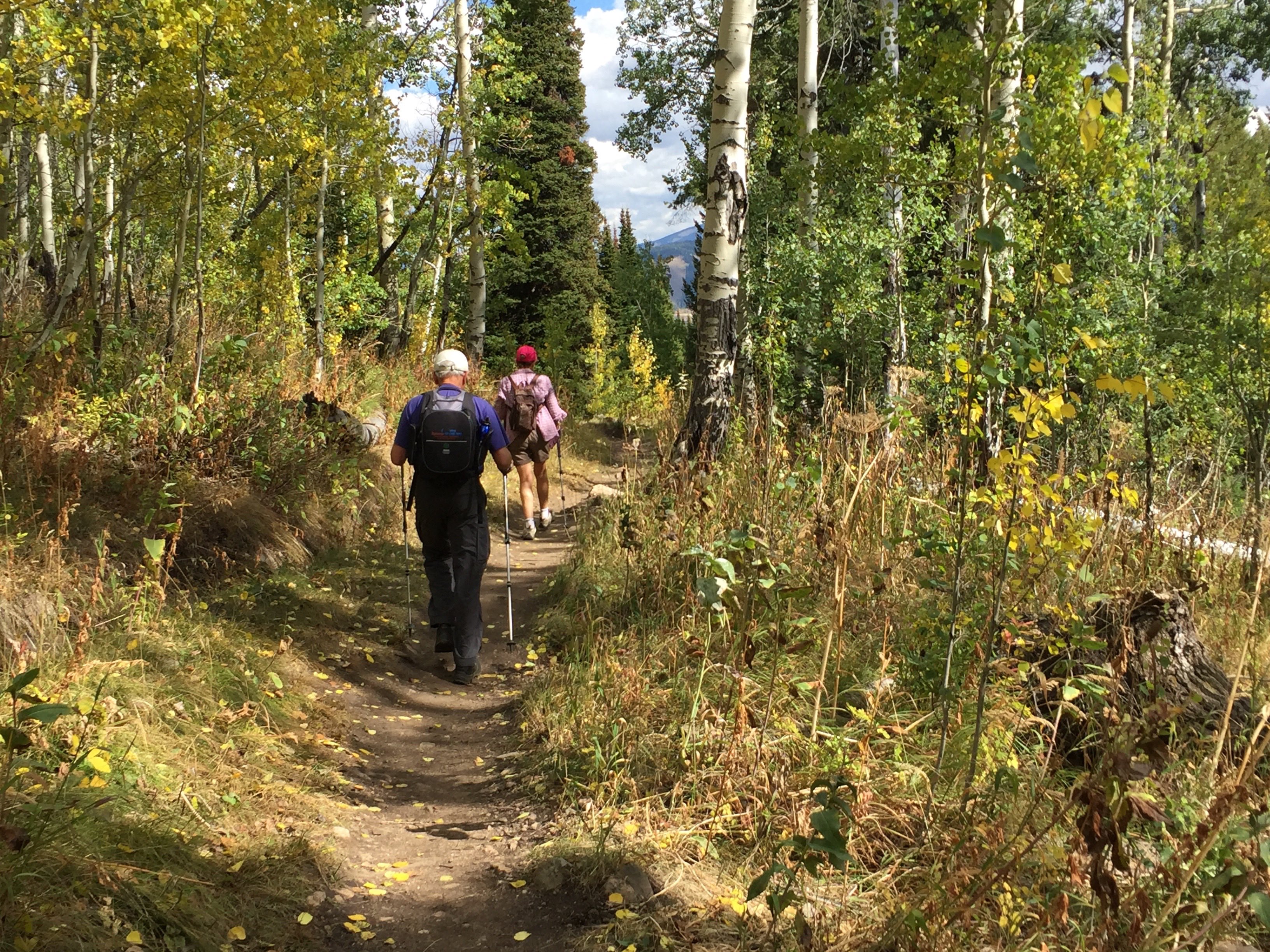 They were my Sherpas.

In their wake I felt small and sometimes silly. But I did not feel scared; I felt safe. And small and safe felt a whole lot better than brave and dead.

When I safely arrived at the bottom of the mountain and far away from that pretty picture, I ran into my parents’ arms like the scared child I was.

Here’s what I learned from my journey to the top of a mountain.

Behind every picture is a story. Don’t assume otherwise.

We shouldn’t let our pictures stand-alone. It feels irresponsible. We shouldn’t allow others to assume we have our act together when we’re falling apart on the inside.

It’s time to tell the truth about our pictures.

Maybe a picture is worth a thousand words, but only if we’re the ones brave enough to share the true words.

So true and so open. That’s what I love about your writing. Thanks for sharing this and many other adventures! Loved it!

It was quite the experience…glad you enjoyed it! Thank you for reading.

Perhaps my favorite of your posts. ❤️
I deactivated my Facebook account two weeks ago. I’m still on IG but, without FB, I’m eminently happier. Whoever said, Comparison is the thief of joy, is a genius.

Lisa – Thanks for the kind words. I’m glad you liked the post. It was a fun one to right. And I’m thrilled your finding freedom in walking away from FB. Sending you love!