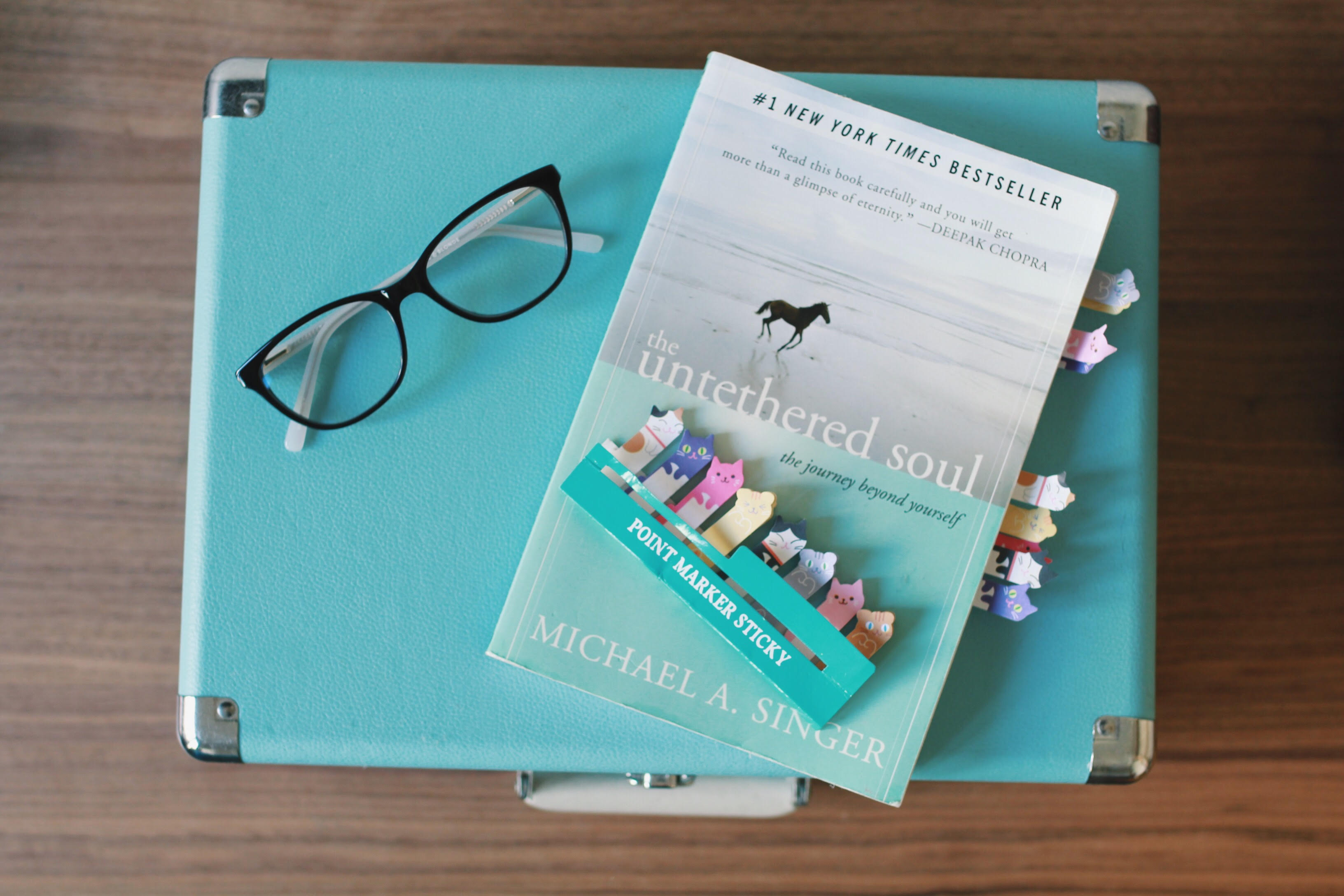 There’s a common phrase we use a lot to describe ourselves that I find disturbing. It sounds innocent enough, but it’s not innocent. It’s damaging.  The phrase is:

We’re our own worst enemy.

We laugh when we say it. “Oh, you know me…I’m always my own worst enemy. Hahaha.”

But it’s not funny.

What a horrible sentiment. The next time this thought crosses your mind, instead of just letting it roll off your tongue for comedic relief, think about what the sentiment is actually saying.

Your greatest enemy in the world is you.

We treat this astonishing sentiment like it’s a joke. But it’s not a joke.

Yesterday, I experienced the depth of this truth during a workshop I was running for 100 working parents. 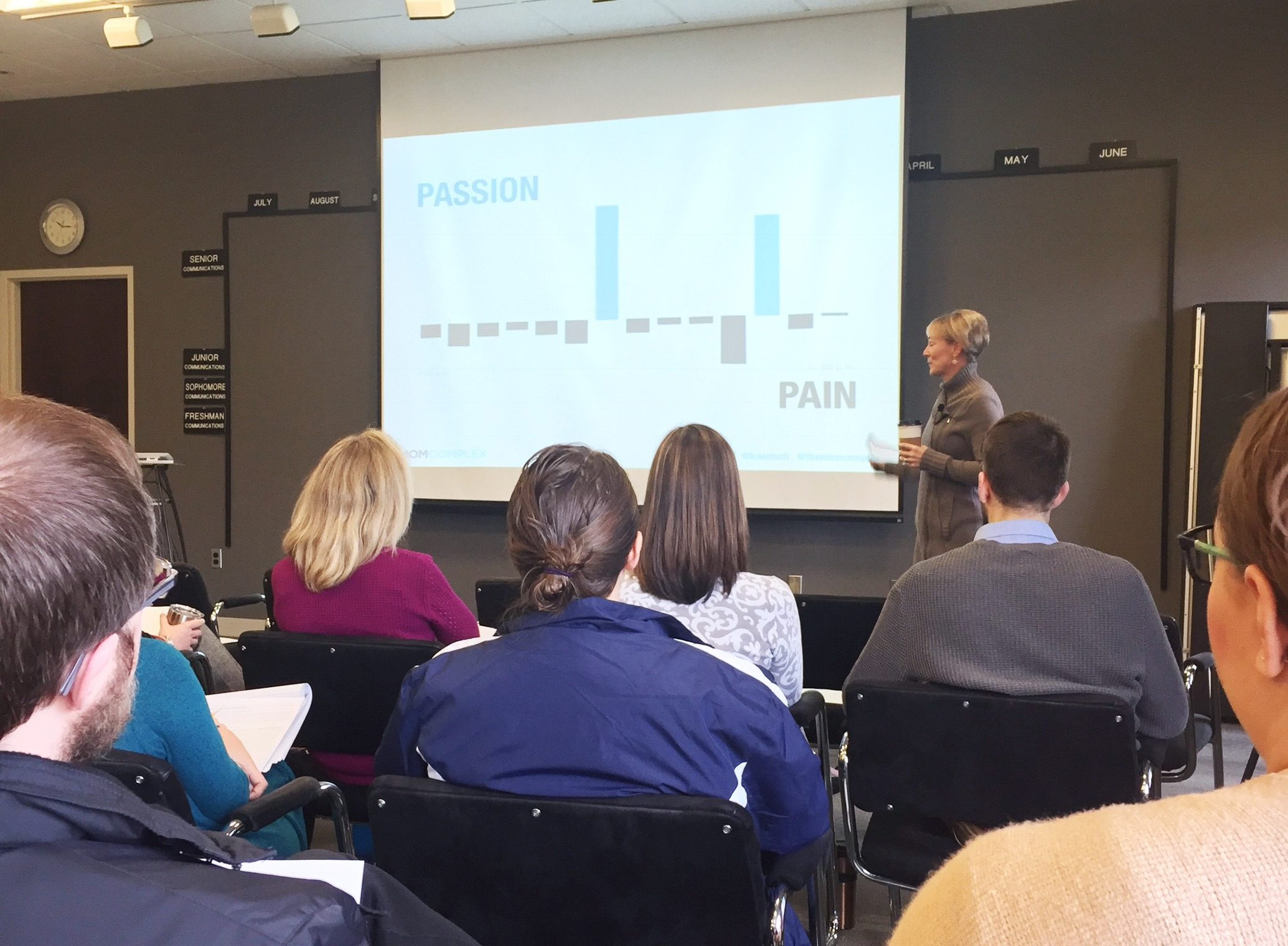 During the workshop, I spent a lot of time talking about the mean voice we all have in our head. You know, the second-guessing, backseat-driving, condescending voice that follows you around and questions your every move.

To bring the concept to life, I asked the workshop participants one simple question: What’s the last terrible thing you said to yourself?

I assured everyone that if they were anything like me, they shouldn’t have to go back very far in the archives to find some material.

When I asked for a volunteer to get the honesty party started, Tina from the front row was brave enough to go first.

Tina was a very well-dressed, professional woman wearing a beautiful bright orange dress and funky glasses. I recognized Tina because just a few minutes earlier she had kicked off the workshop by informing everyone that she had commissioned the workshop herself and that she was going to turn the idea a larger speaker series to benefit the entire company. Then, she introduced me to the group.

I was happy that Tina volunteered to go first because I was intrigued as to what a beautiful, talented and clearly very driven woman would have negatively to say about herself.

Tina stood up in front of 100 people and said, “The last terrible thing I said to myself was, ‘You did a terrible job introducing Katherine. You suck and everybody knows it.’”

There was an audible gasp in the room.

I invited the group, filled with Tina’s friends and peers, to respond. Of course, they all told Tina that she did a great job kicking off the workshop. Oh, and by the way, initiating the whole damn thing.

What a remarkable difference between perception and reality that begs an important question.

What exactly were Tina’s expectations for introducing me? The task at hand was to simply read my bio out loud. Was she thinking her job was to make my bio better?! Was she hoping to do an interpretive dance to bring my work experience to life?

Tina’s job was to read the bio and she did a wonderful job reading my bio. End of story.

But as women, we can’t seem to let the story end. No matter what we do, we assume it could have been better and that we probably screwed something up along the way.

The stories we tell ourselves never end.

After Tina’s critical critique of her performance reading my bio, the hits kept coming regarding the last terrible thing the women in the room said to themselves.

Karen: “You’re an idiot for forgetting to send your son’s snack to school with him today.”

Allison: “You have bags under your eyes and you look exhausted.”

Margaret: “You never use your gym membership, so you’re paying to be lazy.”

I even called on Jamie from my own team and her sentiment, like Tina’s, had to do with the setup of the workshop. Her quote was, “You’ve had PowerPoint for 10 years and you still don’t know how to use it.” 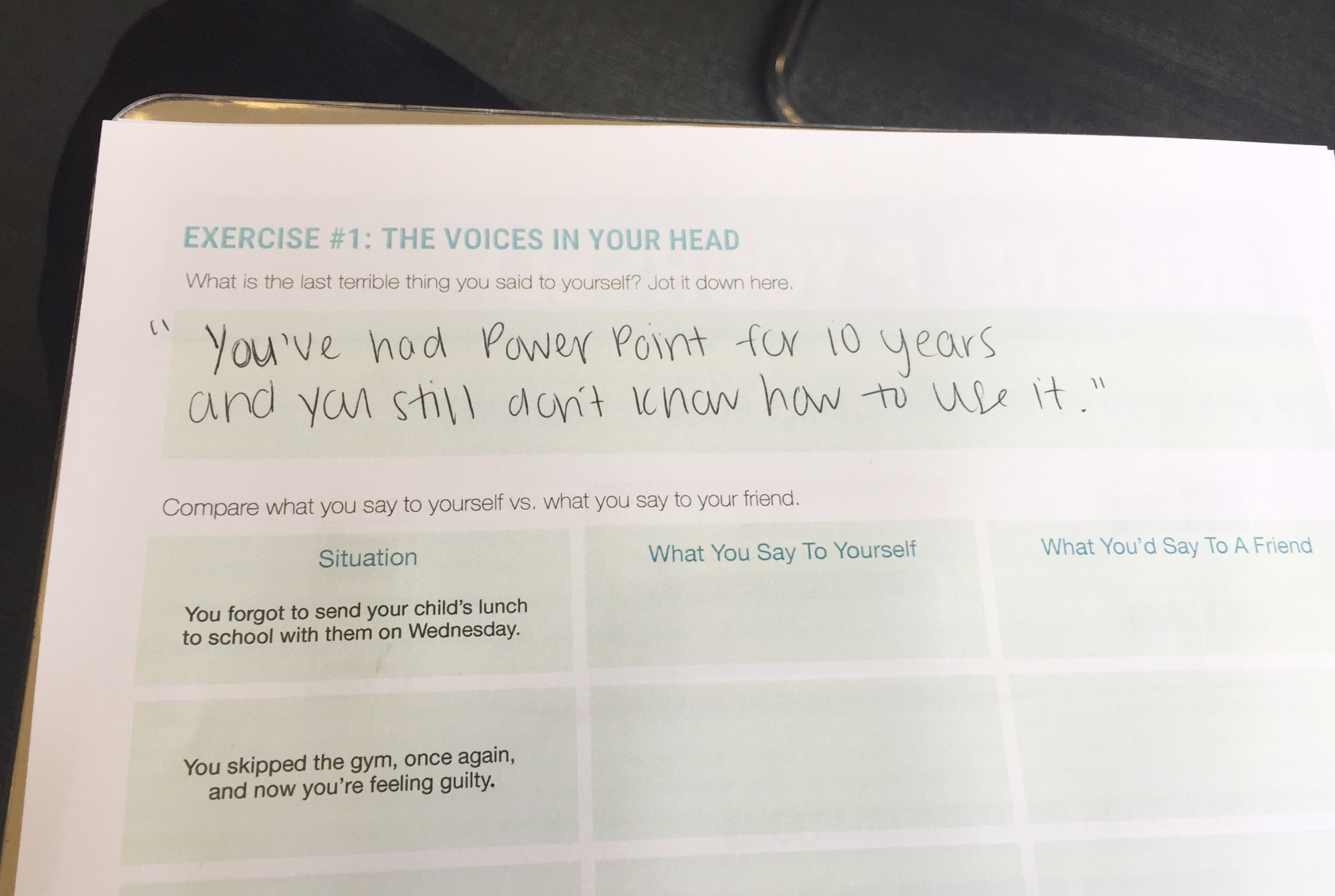 Jamie was referring to a glitch we had with the PowerPoint presentation before starting the workshop. It was a quick blip on the radar that we found a solution to in a matter of minutes, and the world kept spinning.

I was right. Everyone who shared the last terrible thing they said to themselves did not have to go far back in time. Every single example shared out loud was from that very same day.

And it was only ten o’clock in the morning.

In the book Untethered Soul, author Michael Singer describes the voice in our head like this:

“How would you feel if someone outside really started talking to you the way your inner voice does? How would you relate to a person who opened their mouth to say everything your mental voice says? After a very short period of time, you would tell them to leave and never come back. If someone followed you around and said to you what you say to yourself, you wouldn’t make it past lunchtime. “

Man, we’re hard on ourselves. Maybe it would be better if we didn’t get out of bed in the morning. Speaking of men, apparently, they do not suffer from the same mean voices in their heads.

During the workshop, when I asked for people to share the last terrible thing they said to themselves, a gentleman in the back of the room raised his hand and said, “I don’t understand what you mean.”

The woman sitting next to him looked at him as if to say, “I’ve got about 50 to choose from if you’re looking for some examples.”

After the women unloaded their dirty laundry, I was curious to hear more from the men. How did the voices in their heads differ from the examples the women just shared?

Oh, what I wouldn’t give to live in the mind of a man.

In other words, if Jamie were a guy the voice in her head might have said, “PowerPoint sucks,” instead of “I suck for not understanding everything about PowerPoint.”

Here’s a fact of life — you can’t escape you.

So, maybe it’s time to learn how to deal with yourself.

Here’s your chance. Complete this quick exercise: What’s the last terrible thing you said to yourself?

Now, try one of these techniques on for size:

It’s certainly worth a try. What do you have to lose, other than the jerk-0f-a-voice in your head.

And when you’re done with this exercise, go say something nice to another woman or a mother. It’s highly likely that she’s been engrossed in enemy combat since her alarm clock went off this morning…against herself.