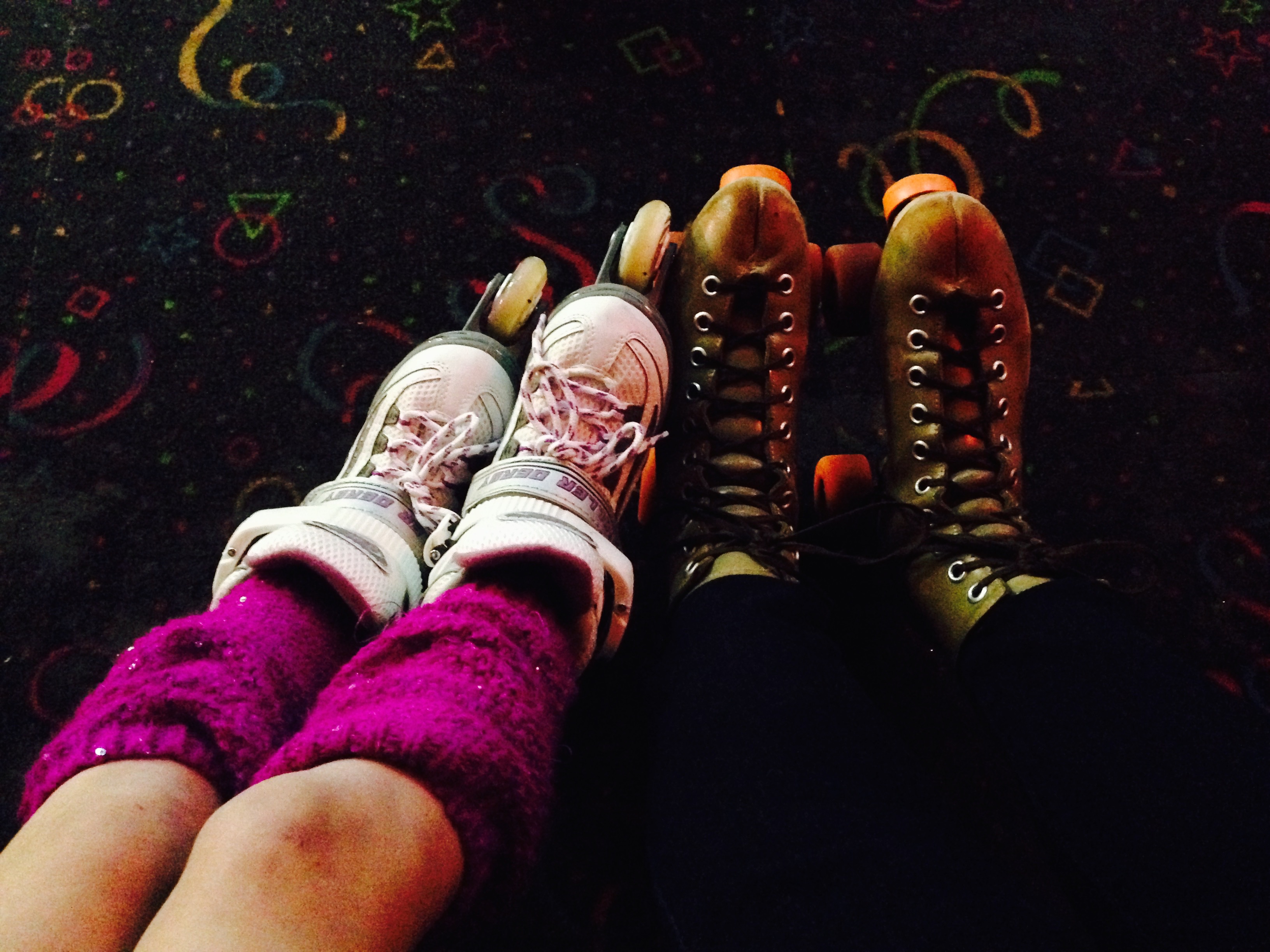 You can learn a lot from the roller rink.

My daughter Layla has determined that skating is decidedly not “her thing,”but we still enjoy it every once in a while—me and the kids, skating around in the dark singing, “This is how we do it!”

So far, nobody’s broken anything—which is positive. So we keep going back.

Last weekend I took the kids roller skating and I was amazed at how many life lessons one can glean from the roller rink. If you can look past the shag carpeting, you can learn a lot about life.

Here’s what I learned.

Hilarious. This woman wanted to take her older children roller skating but she had a baby to contend with. Her options: (1) Stay at home with the baby and listen to the older kids whine about how bored they are. Um, no thank you. (2) Sit on the sidelines rocking a baby while you watch the other kids skate around and have fun. Ugh. Another missed opportunity. (3) Put the stroller on the rink and go for it. Yes, please. I’m pretty sure this is the greatest demonstration of finding a win-win solution that I’ve ever seen. “I have a baby and I’m going to roll with it!” Well played. Babies have a reputation for putting a damper on older kids’ fun. But this mom made me realize it doesn’t have to be that way. If you find yourself in a pinch, find a better way. Through caution (and safety?) to the wind and go with it.

2. Teach your kids to do what you love.

Finding fun things to do with your kids can be a chore. Yes because there are not enough hours in the day, but also because the things that kids like to do are not often very fun for adults. Jumping around like a monkey at one of those indoor trampoline parks? I’ll pass. Playng Minecraft in the basement? I still don’t get it: who is the Enderman and why does he make those weird sounds? Doing puzzles until my eyes bleed? Please make it stop. This dad has obviously found common ground with his kids. He’s really into roller skating (the aftermarket neon lights on his skates are a dead giveaway) and he’s teaching his daughter to love it, too. Instead of suffering through role-playing with an American Girl doll, he’s teaching her to roll like he does. And the two of them danced and sang and twirled their way around the rink for hours. It was a beautiful sight.

3. Push past your fears with a little PVC pipe.

This reluctant child had obviously been dragged to the rink against his will. He was terrified. Still, rather than sitting on the sidelines and moping, he gathered his courage and grabbed what appeared to be a “walker”—or should I say roller—for novices. Made of PVC pipe, this handy little frame gave him confidence. He simply held on tight, pushed it around the rink, and didn’t miss a beat. How brave. He reminded me that while, yes, it’s OK to be afraid of things in life, you can’t let your fear prevent you from having fun. Find a crutch, support of some kind, and roll with it.

I’m convinced this guy (skating backwards) has the answers to all of life’s questions. He floated around the rink like a butterfly—forwards, backwards, sideways—with some of the best moves I’ve ever seen. I bet he’s at least 75 years old and he didn’t seem to have a care in the world. Shirt tucked in with sleeves rolled up? Snazzy bolo tie? Wrist protectors? Check, check and check. Let’s do this. This sharp dresser prompted me to wonder whether I’d ever chickened out of something because I didn’t want to stick out like a sore thumb. He showed me that stressing out about being the oldest/youngest/biggest/smallest is a waste of time (and, potentially, a great outfit). Just get out there and go with it.

5. Don’t worry about what other people think.

I used to have a palpable fear about what other people thought of me. I think dogs could sense me coming. My world and my self-esteem revolved around performing, perfecting and pleasing. So I guarantee you that two years ago I wouldn’t have been caught dead in a roller rink race in ratty rental skates. But here I am. I’ve let go of those fears. That’s me rounding the corner, chasing after a 14-year-old boy like it’s my job. I never caught him, but I was damn close. I’ll try again next time. And many more times after that.

Our lives tend to be filled with so many serious situations and grave conversations. Every once in a while it’s great to take a break from all that jazz and spend some time outside of your comfort zone to see what you can learn from real life.

The next time I complain about something holding me back, I’ll think about the woman pushing a baby stroller around a roller rink. And when I realize I’m taking myself too seriously, I’ll think about the backwards-skating grandpa, who did what he enjoyed, even though it wasn’t what was expected of him.

I can only hope that I’ll be doing the same when I’m 75 years old. And hopefully by then I will have traded in my nasty, floppy rental skates for a snazzy, well-fitting pair of my own. And I hope they have flashing neon lights.